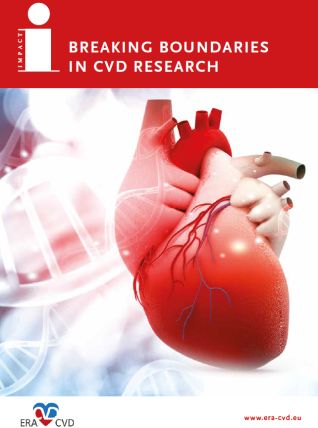 ERA-CVD – Cardiovascular Research is our mission

Among non‐communicable diseases, cardiovascular diseases (CVD) are the major cause of death in Europe, claiming more than 4 million people per year in the 53 member states of the WHO European Region and around 2 million in the European Union. Recent data indicate that up to 80% of all healthcare expenditure in Europe is allocated to chronic diseases, with CVD alone being estimated to account for more than 196 billion € every year within the EU economy.

CVD research is not only a crucial area in health research overall, but could become an outstanding example of research driven innovation across Europe. An effective coordination of research at national and EU level, increased cross-disciplinary interaction and research advancements are urgently needed. By gathering their forces and funding capacities, so far 19 countries aim at responding to this demand by setting up a new ERA‐Net Cofund action (European Research Area Network co-funded by the European Commission, EC) dedicated to cardiovascular diseases (ERA-CVD). ERA-CVD officially started in October 2015.

The goal of ERA-CVD is to create a European Research Area in which cardiovascular research is conducted and funded across countries via the responsible funding organisations, allowing research groups to jointly work on specific challenges, exchange ideas, and benefit from cross border expertise. ERA-CVD implemented one Joint Transnational Call (JTC2016, Heart Failure) with EC co-funding, and one non-cofunded call (JTC2017, Mechanisms of early atherosclerosis and/or plaque instability in Coronary Artery Disease) and continues to realize further JTCs.

ERA-CVD cooperates with the European Society of Cardiology (ESC) and the European Heart Network (EHN). In addition, the exchange and cooperation with European Research Infrastructures, e.g. the ESFRI-initiatives are intended to support an efficient European framework for innovative transnational research on CVD and international research collaborations.